The following page lists all the available chess pieces together with their species and class. For effects of the latter, see their respective pages.

Chess pool is shared for all chess players. Each different piece has its own unique pool according to its cost:

Because of this, it is possible to reduce the overall total number of Druid pieces in a game if combined using 3 pieces.

With the introduction of Io (see in later section), it is possible to return more pieces than required to combine, which can increase overall total number of any piece in a game.

The chance of rolling rarer pieces is linked to your level. You can see the percentages in-game by selecting your courier and hovering over the tower/reroll icon on your skill bar.

Whenever a chess piece is to be replaced by a new one (either by manually re-rolling or the natural re-roll after a round), all chess pieces that were still in the shop are added to list of pieces that cannot occur in the next pack. This list is completely renewed on every re-roll, so previous blacklists have no effect.

If a rolled piece would be on the blacklist, it is rolled again (in it's entirety) until that piece is not on the blacklist. Since the entire rolling procedure is repeated whenever a piece on the blacklist is hit, you can get an SSR, IO, or piece from any cost (with the usual chances) from that re-roll. This makes rolling an IO more likely the likelier it is you will hit the blacklisted piece. 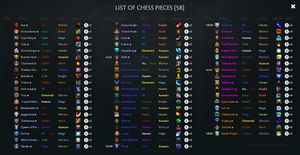 *Currently removed from the pool as of patch 3/29/19, being adjusted.

SSR pieces are alternative versions of some chess pieces that are much more powerful than their normal counterparts.

They have stats comparable to 3 star units and cannot be upgraded. They have different abilities from their normal counterparts.

Io is a 5 cost piece that can be used as a substitute in place of other chess piece for upgrading.

SSR pieces and Io do not belong to the piece pool and theoretically there are infinitely many of them. When sold, they also do not return to the normal piece pool.

For each slot of the Reroll interface, roll 2 random numbers in range 1 to 10000.